Interview on truth and imagination of community development 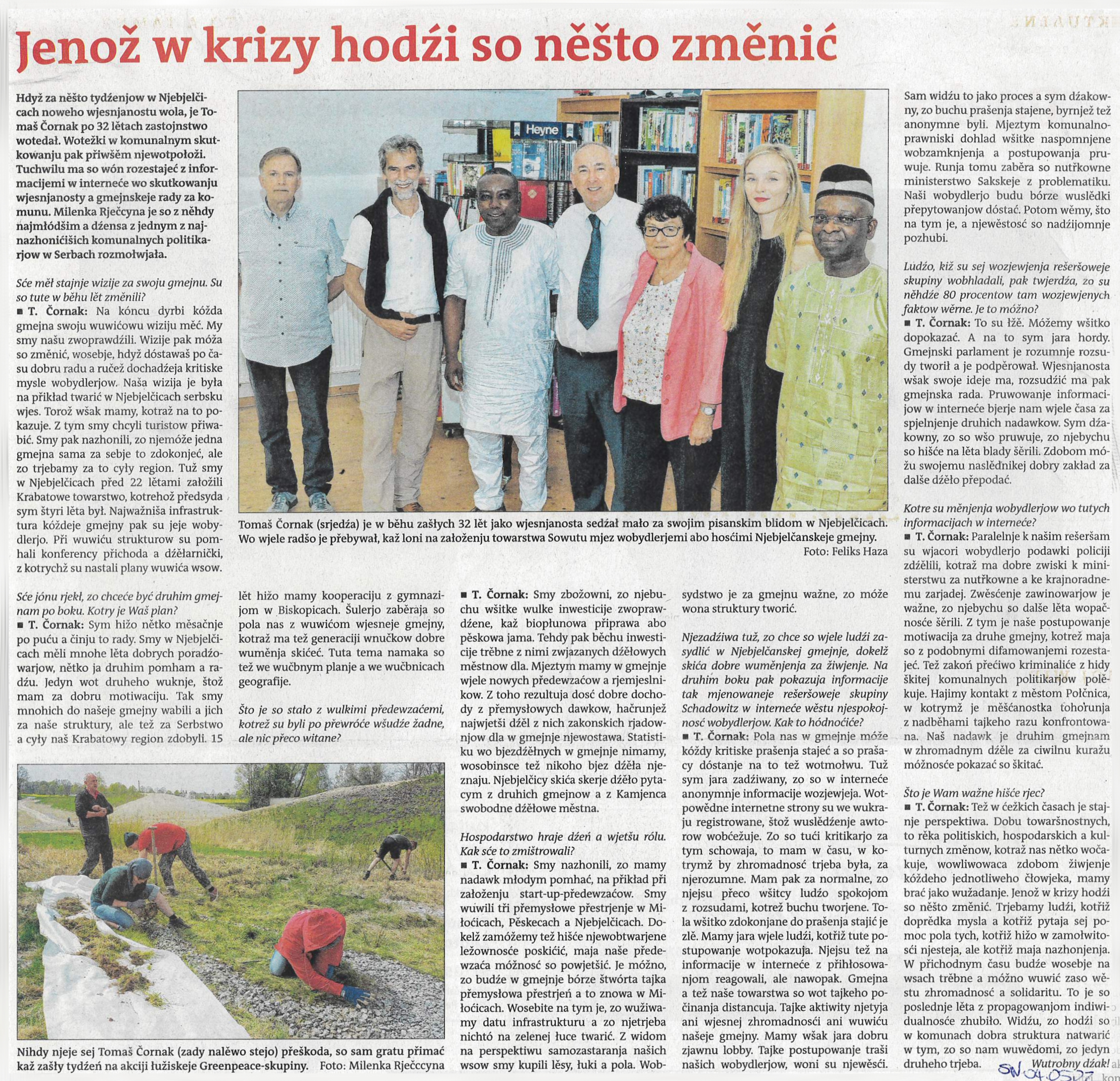 When a new mayor is elected in Nebelschütz in a few weeks, Thomas Zschornak will have resigned from office after 32 years. However, he is not letting go of the reins of municipal work. At the moment, he has to deal with information in the Interent about the work of the mayor and the municipal council for the community. Milenka Retschke talked to the former youngest and now one of the most experienced local politicians in Sorbenland for Serbske Nowiny.

You have always had a vision for the development of your community. Have these changed over the years?

T. Zschornak: Ultimately, every community must have its own vision for development. We have implemented ours. However, visions can change. Especially if there is good advice in time and if residents express critical ideas. For example, our vision was to build a historical Sorbian village in Nebelschütz. We have the gatehouse, which refers to it. We wanted to attract tourists with it. However, we have gained experience that this cannot be achieved by one municipality alone, but that the entire region is needed for this. So 22 years ago we founded the Krabat Association in Nebelschütz, of which I was chairman for four years. However, the most important infrastructure of any community is its inhabitants. Future conferences and workshops, from which plans for village development have emerged, have helped in the development of our structure.

You once said that you wanted to stand by other communities. What is your plan?

T. Zschornak: I am already on the road every month and I enjoy doing this. We had good advisors in Nebelschütz for several years, now I help and advise others. One learns from the other, which I consider a good motivation. In this way we have attracted many people to our community and inspired them for our structures but also for Sorbianism and the entire Krabat region. We have been cooperating with the grammar school in Bischofswerda for 15 years. The pupils deal with the development of the village community, which should also offer good conditions for the grandchildren's generation. This topic can also be found in the Saxon curriculum and in the textbook for the subject Geography Terra.

What about the big projects that were called for everywhere after the fall of communism, but were not always welcome?

T. Zschornak: We are happy that not all the big investments were realised, like the biogas plant and the sand pit. At that time, however, investments were necessary because of the lack of jobs. Meanwhile, we have a lot of businesses and craftsmen in the community. This results in quite good income from business taxes, although a large part does not stay in the municipality because of legal regulations. We don't have any statistics on the unemployed in the municipality, and I personally don't know anyone without a job. Nebelschütz rather offers employment opportunities to job seekers from other municipalities and Kamenz.

The economy is playing an increasingly important role. How have they coped with that?

T. Zschornak: We have made the experience that we have the task of supporting young people, for example, in founding start-up companies. We have developed three industrial estates, in Miltitz, Piskowitz and Nebelschütz. Since we can still offer undeveloped plots, our companies have the opportunity to expand. Perhaps a new industrial estate will soon be created in the municipality, in Miltitz. The special thing about this is that we are using existing infrastructures so that no one has to build on a greenfield site. With the perspective of self-sufficiency for our villages, we have bought forests, meadows and fields. Property is important for a community to form structures.

t is therefore not surprising that many people want to settle in the municipality of Nebelschütz, as it offers good conditions for living in the countryside. On the other hand, information from a so-called Schadowitz research group on the internet shows a certain dissatisfaction among residents. How do you assess this?

T. Zschornak: In our community everyone can ask critical questions and the questioner gets an answer. That is why I am very surprised that information is published anonymously on the internet. The corresponding websites are registered abroad, which makes it difficult to trace the authors. I find it incomprehensible that these critics are hiding behind this in a time when common ground is needed. For me, however, it is normal that not all people are always satisfied with decisions that have been made. However, to question everything that has been achieved is bad. We have many people who reject this approach. They have not given their consent to the publication on the internet, on the contrary. The municipality as well as the associations reject this procedure and distance themselves from it on the internet. Such activists damage the village community and the development of the municipality. After all, we have a very good public lobby. Such action hurts our residents, they are insecure. I myself see this as a process and am grateful for the questioning, although it is incomprehensible. In the meantime, the legal supervisory office of the district of Bautzen is examining all the resolutions mentioned as well as the procedure. At the same time, the Saxon Ministry of the Interior is dealing with this issue. Our residents will receive the results of the investigations. Then we will know what is at stake and hopefully the uncertainty will disappear.

However, people who have looked at the publications of the research group claim that about 80 percent of the facts published there are true. Is that possible?

T. Zschornak: Those are lies. We can prove everything. And I am very proud of that. The municipal parliament has made sensible decisions. The mayor has his own ideas, but the municipal council has to decide. Checking information from the internet takes a lot of time away from other tasks. I am grateful that everything is checked, that gossip is not spread for years. At the same time, I can hand over to my successor a good basis for further work.

What do the residents think about this information on the internet?

T. Zschornak: Parallel to our research, several residents have reported the events to the police, who have good contacts with the Ministry of the Interior and the District Office. It is important to find the initiators of the internet pages so that no false information is spread in the years to come. Thus, our action is motivation for other municipalities that have to deal with similar defamation. The law against hate crime also supports the protection of local politicians. We maintain contact with Pulsnitz, where the mayor is also confronted with similar defamation. Our task is to show other municipalities ways to protect themselves by working together for civil courage.

What else is important for you to say?

T. Zschornak: Even in difficult times there is always a perspective. We have to take the time of social, i.e. political, economic and cultural changes that are currently awaiting us, which at the same time influence the life of every individual, as a challenge. Only in the crisis can we change something. We need people who think ahead and who seek help from others, from those who are already no longer in charge but who have experience. In the future, it will be necessary and possible to develop a certain community and solidarity, especially in the villages. This has been somewhat lost in recent years with the propagation of individuality. I see that it is possible to build up a good structure in the communities by remembering that one needs the other.
Translation from the SN article from 04.05.2022

We use cookies on our website. Some of them are essential for the operation of the site, while others help us to improve this site and the user experience (tracking cookies). You can decide for yourself whether you want to allow cookies or not. Please note that if you reject them, you may not be able to use all the functionalities of the site.